Posted by Abhilash MS
Lord Rama is the seventh avatar among the Dasavataras of Lord Vishnu and was the King of Ayodhya according to ancient Indian Puranas. Lord Ram or Ramachandra is believed to have appeared in the last quarter of Treta Yuga. The Indian epic Ramayana (translated as “Rama's Journey”) written by Sage Valmiki narrates the story of Lord Ram. Ayodhya is said to be the birthplace of Rama and he is also worshipped as an infant or Rama Lalla.

Lord Rama is referred in Hinduism as Maryada Purushottama, meaning the Perfect Man or Lord of Self-Control or Lord of Virtue. He is the symbol of civility and a man of values and morals. Sita, who is considered to be an avatar of Mahalakshmi, and the embodiment of perfect womanhood, is the divine wife of Lord Rama. 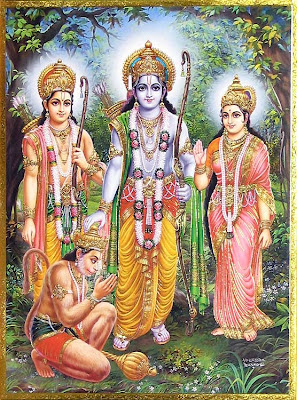 One of the important figures and deities in Hinduism, Lord Rama, is depicted as a standing figure in princely attire, with an arrow in his right hand, a bow in his left and a quiver on his back. His statue is usually accompanied by his wife Sita, brother Lakshmana, and the legendary monkey devotee, Hanuman. Anjaneya is said to be the incarnation of Lord Shiva and the son of Vayu, the God of Wind. He is worshipped for his strength and courage and a man of great learning.

Ramnavami Festival, or the birthday of Lord Rama, is one of the most important festivals dedicated o Ramachandra. The festival celebrated mainly by the Vaishnava sect falls on the 9th day of the bright fortnight of the month of Chaitra Masa Suklapaksha Navami (March – April). On this day, the marriage of Lord Rama and Sita and also the birthday of Lord Rama are performed. People perform Kalyanotsavam (marriage celebration) for the statues of Rama and Sita at their houses. At the end of the day, the idols are taken in a procession on the streets.
Lord Rama Temples

There are numerous Lord Ram Temples in India and abroad. Some of the most popular among them include