Posted by Abhilash MS
Rahu is one of the nine Navagraha planets in Hindu astrology. According to Hindu mythology, Rahu is not the actual planet but a snake that swallows the Sun or the Moon causing eclipses. However, in Astronomy, Rahu and Ketu refer to the two points of intersection of the paths of the Sun and the Moon when they move on the celestial sphere. Consequently, Rahu and Ketu are called the north lunar node and the south lunar node respectively.

Rahu is usually depicted as the head of a demon snake. He is described as a dragon with no body, riding a chariot drawn by eight black horses.

Rahu, considered as a malefic planet, is a ‘shudra graha’ which presides over illiterate and impolite people. Its harmful effects signify thieves, magicians, poison, snake, jails, cemeteries etc. However, Rahu also acts favorably on a person, granting success, strengthening one’s power and turning enemy to friend. Rahu kala (one of the 8 segments of the day) is considered inauspicious. 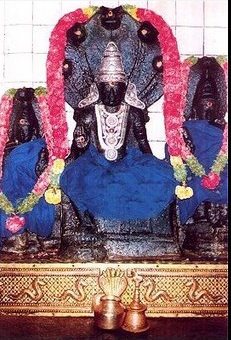 Traditions say that during the churning of milky ocean by Asuras and Devas, Rahu disguised himself as a Deva and drank some of the nectar. However, before it could pass the throat of Rahu, Lord Vishnu cut off his head which remained immortal. It is said that this head swallows the sun and the moon, causing eclipses.

Naganathaswamy Temple is the Rahu Sthalam which is located at Tirunageswaram in Thanjavur District of Tamilnadu.