Posted by Abhilash MS
Read the story of Attukal Devi and history of Attukal Temple in Trivandrum. According to the Hindu mythology, Attukal Devi is considered as an incarnation of Kannaki.  Kannagi is a famous character in the poem of Silappadhikaram (Chilapathikaram) written by a Tamil Poet Ilango Adigal (Elenkovadikal). Kannaki is considered to be one of the incarnations of Goddess Parvati who is worshipped in the form of Attukal Amma. The story says that Kannaki with revenge destructed city of Madurai, as her husband Kovalan was sentenced to death for a mistaken which he doesn’t committed.

According to the story Kannagi who was married to Kovalan the son of a wealthy merchant. They lived at Kaveripattinam until Kovalan fall in love with a dancer named Madhavi. He gradually spends all his wealth for Madhavi. When he realised the mistake he was empty handed and returned to Kannagi. The only asset remained in their hands was a pair of anklets (Chilambu) filled with precious gems. Kannagi and Kovalan went to the city of Madurai with the anklets to sell them and start a new business. 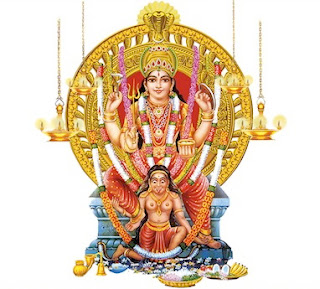 Unfortunately, the Queen lost one of her anklets and it had very similar resemblance with Kannagi’s. The only difference between the two is one has pearls inside and other gems inside.  So they suspected Kovalan had stolen the Queen’s anklet of pearls. Pandya King Nedunj Cheliyan – 1 who was the ruler of Madurai beheaded Kovalan who was accused of having stolen the anklet. When Kannagi came to know about this she became furious and went to prove her husband’s innocence. When she told about the gems inside her anklet the King and Queen realised their mistake that the anklet of the Queen is filled with pearls. In anger Kannagi destroyed the entire Madurai and went to Kodugalloor. On her way to Kodugalloor she took a visit at Attukal. The Thottampattu sung during the Attukal Pongala Festival are based on the story of Kannagi.

It is believed that the devotees who pray to Attukal Devi with ultimate devotion their wish will be fulfilled by the Goddess Shakti (Parvathy).  Attukal Temple is famous though out the world for Attukal Pongala Festival celebrated during February – March seasons (Makaram – Kumbham of Malayalam months). The festival ends with the famous Attukal Pongala where lakhs and lakhs of devotees come to the temple to seek the blessing of Attukal Devi.

About Attukal Temple in Kerala

The location of Attukal Devi Temple is just 2 km from the heart of Trivandrum city in Kerala. The temple is one of the most important places of Devi worship in Kerala. Attukal Bhagavathy Temple is popularly known as the Sabarimala of Women.