Posted by Abhilash MS
Sudarshana Chakra is holy wheel weapon of Lord Vishnu which is usually used for the ultimate destruction of an enemy and protecting good over eveil. Sudarshana Chakra adorns the right rear hand of the four hands of Mahavishnu. This disk-like weapon consists of 108 serrated edges Sudarshana Chakra is also known as Chakkrath Azhwar (Sage of the Wheel) in Tamil Language and is worshipped by Vaishnavas. Lord Sudarshana is also worshiped as Paramapurusha and Ayudhapurusha.


The literal meaning of the Sanskrit word Sudarshana is "Vision of which is auspicious". It is a combination of the words "Su" which means "Divine" and "Darshana" which means "Vision". Sudarshana is regarded as the Hindu god who helps the devotees to clear the difficult path to attain Moksha in life. 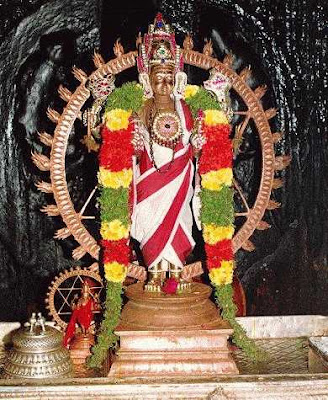 
Sudarshana Homam is usually performed to eliminate any negative powers or vibrations from house premises and workplaces. The fire ritual is also conducted for longevity, health, acquiring knowledge, and removing any obstacles in life. It is believed that performing of one Sudarshana Homam is equal to conducting 10 yagnas of any other kind. Sudarshana Homam is conducted in temples to improve the energy level in the environment.

Sudarshana Gayatri and Sudarshana Ashtakam are the most popularly chanted mantras associated with Lord Sudarshana Chakra.