Garbarakshambigai Temple enshrines Lord Shiva as Mullaivananathar and Goddess Parvati as Garbarakshambigai or Karukathanayaki. Garbharakshambika literally means “The Mother Who Protects the Womb”. Madhavivaneswarar and Garbapureeswarar are the other names of Lord Shiva here.

In earlier period, the place was covered with Jasmine flowers called ‘Mullai’ in Tamil and hence the place was called as Mullaivanam (Jasmine Forest). Garbarakshambigai Temple has a main Rajagopuram on the east and another entrance on the south side. The shrines of Lord Mullaivananathar and Goddess Karparakshambigai, located in the outer prakaram, face the east direction. The Shiva Lingam found in the main sanctum of this temple is a Swayambu Lingam, made up of ant hill mud. Therefore no water abhishekam (ablution) is done for this idol. But, the Lingam is only pasted with Punugu (in Tamil). It is believed that people who are affected with incurable diseases can offer "Punugu Chattam" to the Lord to get relieve from the diseases. 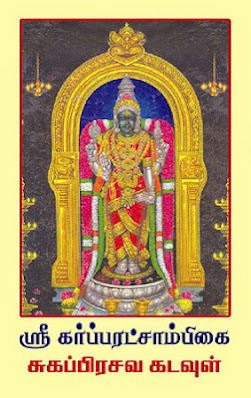 The Nandi and Karpaga Vinayagar idols inside the temple are also believed of Swaymbu form. The shrine of Goddess Garbarakshambigai is situated to the left of the Shiva temple. A shrine dedicated to Lord Subramanya is also seen here. Ancient inscriptions on the wall inside the temple are other notable interests. An important feature of this temple is that the moon’s rays fall on the Siva Lingam on the full moon day during the Tamil month of Panguni (March – April) every year.

As a custom, the childless couples offer ghee, which will be placed at the feet of the Goddess Garbarakshambigai and given to them. They should consume a little of the ghee at night daily for about 48 days and the woman will conceive.  The women who are expecting deliveries should offer castor oil, which will be placed at the feet of Sri Karparakshambigai, and offered to them. During labor pains, this oil should be rubbed on their abdomen and this is believed to remove all complications of deliveries.

Thirukarugavur is located in Papanasam Taluka which is on Thanjavur – Kumbakonam road. Papanasam is 20 km south west of Kumbakonam and 20 km east of Thanjavur. Frequent buses are available from both the towns. The Kumbakonam Railway Station and Trichy Airport are the nearest access points.