Posted by Abhilash MS
Lord Muruga or Murugan is a popular Hindu God and the son of Lord Shiva and Goddess Parvati. ‘Murugu’ means beauty hence ‘Murugan’ means ‘Beautiful one’. Lord Muruga is also known by the names Kartikeya, Skanda, Guha and Subramanya. He is worshipped particularly among the South Indians both India and abroad. Lord Muruga is the God of War and the patron deity of the Tamil land. According to them Murugan never hesitates to come to the aid of a devotee when called upon in piety or distress. The Hindu God of Beginnings and God of Obstacles, Lord Ganesha is the brother of Murugan.


Kartikeya is always seen with his Vel, the divine spear or Lance that he carries and His mount on the peacock. He is also depicted with weapons including sword, javelin, mace, discus and a bow although more usually he is depicted wielding a sakti or spear. The javelin Lord Muruga holds is used to symbolize His far reaching protection, His bow shows His ability to defeat all ills, His mace represents His strength, and His discus symbolizes His knowledge of truth. The vahana of Lord Murugan is Peacock, which represents the destruction of ego. Murugan is represented as Shanmukha with Six Heads, which signifies the Six Siddhis corresponding to the role of the bestower of siddhis over the course of their spiritual development. Valli and Deivayanai are the consorts of Murugan. 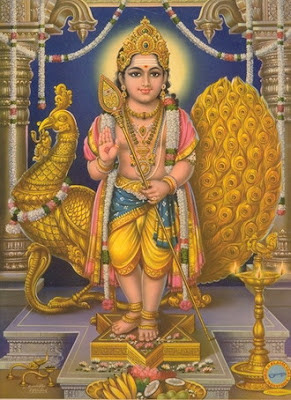 
After the marriage of Lord Shiva and Goddess Shakti, it is said that knowledge and grace joined together to give a Bliss, that is Lord Muruga. The cruelty of Soorapadman, the demon was getting intolerable to all the deities and they ran to Lord Shiva for help. Shiva took a form with six faces and from the third eye of each face a spark came out. Lord Shiva asked Lord Vayu and Lord Agni to take the fire sparks to River Ganga. Later Ganga took them to the Saravan pond where the six sparks became six babies on six red lotus flowers. When Goddess Parvati hugged them together, they joined to become one form with six faces, twelve hands and were named Skandan. He was also called Karthikeyan as there where six ladies called Karthigai to look after Him.

There are numerous temples dedicated to Lord Murugan in India, Sri Lanka, Malaysia, Singapore, United Kingdom, New Zealand, and Canada. The most famous among them are the