Nagaraja King of Snakes in Hinduism

Posted by Abhilash MS
Nagaraja which literally means King of Snakes is a combination of two Sanskrit words “Naga” (Snake) and “Raja” (King). The name Nagaraja in Hinduism refers to three main snake gods the Anantha (Shesha or Sheshanaag), Takshak and Vasuki. These three Snake Gods are the children of Sage Kashyap and his wife Kadru. 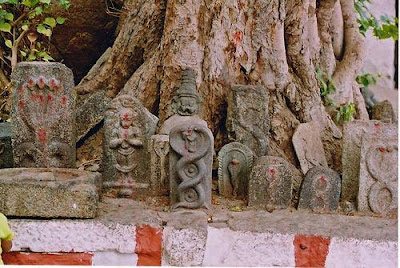 Anantha, the eldest brother of the Nagas, is a thousand-headed immortal snake upon whom Lord Vishnu rests. Lord Anantha symbolizes the friendly aspect of snakes. Sheshanaag forms the bed for Lord Mahavishnu to perform the Yoganidra (continuous meditation) in the primordial ocean of milk (Kshirasagara).

Takshak depicts the dangerous aspects of snakes. Takshaka along with the other two Nagarajas is one of the Ashtanagas (eight great snakes) described in Puranas.

Vasuki was an ardent devotee of Lord Shiva. Vasuki can be seen on the neck of Mahadeva . The Nagaraja represents Kundalini or the dormant energy.