The Das Mahavidya Temple, inside the temple complex, is dedicated to the ten aspects of the Divine Mother Goddess Shakti. The Ganga Maa Temple dedicated to Ganges can also be seen inside the Daksheswara Mahadev Temple. 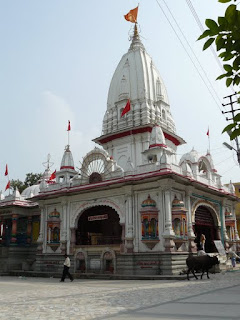 
The present temple structure was constructed in 1810 AD by Queen Dhankaur and later rebuilt in 1962. At the entrance of the temple is a statue of Lord Mahadev carrying the corpse of Sati Devi. A Peepal Tree can be seen inside the temple compound. The legend of Daksha Mahadev Temple in Haridwar is related to the story of Shakti Peethas.

Maha Shivaratri is the major Hindu festival celebrated at Daksha Mahadev Temple and thousands of pilgrims visit the shire to pay homage to Lord Shiva.

Daksha Ghat and Nileshwar Mahadev Temple situated nearby are other importance Hindu pilgrimage places in Haridwar.