Posted by Abhilash MS
Lord Nataraja is the dancing form of Lord Shiva who performs his divine dance to destroy a weary universe and make preparations for Lord Brahma to start the process of creation. The term ‘Nataraj’ means ‘King of Dancers’. It is a visual representation of Lord Brahma and the dance posture of Lord Siva.


In almost all images Shiva is seen with four arms and flying locks dancing on the figure of a dwarf called ‘Apasmara’ symbolizing Siva’s victory over human ignorance. Siva’s right hand in the back holds the “Damaru”, that symbolizes sound originating creation and front right hand is in the “Abhaya Mudra” showering protection from evil and ignorance. The left hand in the back carries Lord Agni which signifies destruction and the front left hand is held across his chest in the Gajahasta or elephant trunk pose, with wrist limp and fingers pointed downward toward the uplifted left foot signifies upliftment and liberation. The fiery ring surrounding Siva is the Prabhamandala representing the universe with all its illusion, suffering and pain. The outer edge is the fire and the inner edge is the water of the oceans. 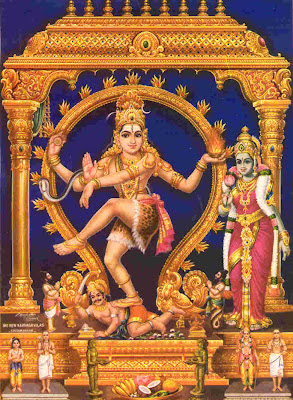 A snake uncoiling from his fore arm, legs and hair which is braided and jeweled stands for egotism unveiling. The snake swirling around his waist is ‘Kundalini’ which is the divine force thought to reside everything. On his head is a skull, which shows his conquest over death. Goddess Ganga also sits on his tangled hair. The crescent moon in his matted hair keeps Kama, the God of Love, alive. His third eye is the symbol of his omniscience, insight and enlightenment. The face of Siva represents his neutrality thus being in balance. The whole idol sits on a lotus pedestal which shows the symbol of creative forces of the universe.


The origin of Nataraja sculpture is in Tamil Nadu in Southern India. History reveals that it was developed in south India by century artists during the Chola period of 9th and 10th century. It is an iconographic representation of the rich and diverse cultural heritage of India and by 12th century AD, Nataraja became the supreme statement of Hindu art. The Natarajar Temple at Neyveli in Tamilnadu has the largest Panchaloha idol of Lord Nataraja.


Chidambaram is called the centre of universe. Here the Nataraja sculpture is made in bronze and has a great relevance the cultural heritage of our country. Dance in its true form is performed here by great artistes to seek blessings from Nataraja to develop their potential in the art. The image of Lord Siva as a cosmic dancer is shown at Chidambaram Natarajar Temple, an unusual presence of the Lord from his other forms. A divine representation of a moving figure than the dancing figure can rarely be seen anywhere.