Posted by Abhilash MS
Tungnath Temple in Uttarakhand is one of the five Panch Kedar temples and is regarded as the highest temple in the world. Believed to be built by Pandavas, this 1000 years old temple, dedicated to Lord Shiva, lies in the mountain range of Tunganath in Rudraprayag district of Tehri Garhwal, in Uttarakhand, India. Among the Panch Kedar temples,  Tungnath Shiva Temple comes in the second position and literally means “Lord of the Peaks”.

Tungnath peaks are located at a height of 3680 meters from the sea level and from this place the two rivers Mandakini and Alakananda commence flowing. The nature has blessed this temple by presenting the holy waterfall Akash Ganga whose origin is presumed to have from heaven. The other four Panch Kedar temples are Kedarnath, Rudranath, Madhyamaheshwar and Kalpeshwar. 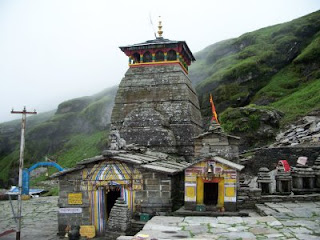 The architecture and style of this temple is absolutely North Indian. The idol of Guru Sankaracharya is placed next to this main idol. Around the temple there are so many small shrines to represent various Hindu gods and goddesses. Among them, the central one is of Goddess Parvathi and the five small shrines located far right are to enshrine the images of all the five Kedar temples. Furthermore in the main sanctum, there are idols of Rishi Vyas and Kala Bhairav made of eight holy metals. At the main entrance of the temple there is one stone idol of Nandi facing the main shrine and at the right side there installed an idol of Lord Ganesha.