Posted by Abhilash MS
Balarama is the elder brother of the Lord Krishna and is regarded as the eight avatar of Lord Vishnu. Balarama is also known as Baladeva, Balabhadra and Halayudha. Vaishnavism and various South Indian Hindu traditions worship Balarama as one of the Dashavatara of Mahavishnu and he is also listed the same way in the Bhagavata Purana. According to Hindu mythology, he is known as a manifestation of Adishesha, the serpent on whom Vishnu rests. Renowned for his loyalty and protection of Sree Krishna, Balarama as a god helps people find magnificent harmony in their lives.

It is said that Lord Vishnu emerged as Balarama, to kill the demon Kansa (Kamsa), as requested by Lord Indra and other gods. Mahavishnu, on showing, a black and a white hair from his head, promised the gods that these two would fight against the demons. Thus, first Balarama (the white hair) and then Krishna (the black hair) appeared in the womb of Devaki. Vasudeva's first wife was Rohini and second wife was Devaki. Devaki got conceived for the seventh time and the Lord made the fetus transferred from the womb of Devaki to that of Rohini. This child was Balarama who grew up in a cowherd's family, together with Krishna. 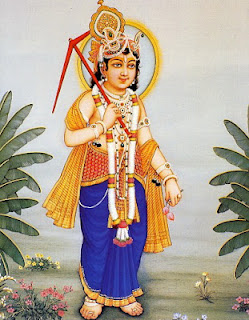 Balarama is depicted as a fair skinned and is described as being physically powerful. His weapons are the hala (plough) and the gada (mace). Usually, he wears blue garments and a garland of forest flowers. With his hair tied in a topknot, he wears earrings, bracelets and armlets. The stories of Balarama are found in the Mahabharata, the Harivamsha, the Bhagavata Purana and various other Puranas. However in some braches of Hinduism, it is held that Gautama Buddha is the ninth incarnation of Vishnu.

Temples of Lord Balarama or Balabhadra

1) Baladevjew Temple or Baladev Jew Temple in  in Ichhapur, Kendrapara in Orissa is one of the main temples of Lord Balaram in India.
2) Ananta Vasudeva Temple in Bhubaneswar, Orissa enshrines the idol of Lord Balarama under a seven hooded serpent.
3) Jagannath Temple in Puri also worships Lord Balarama as a primary deity