Posted by Abhilash MS
Bhartrihari Caves in Ujjain is located on the banks of river Shipra (Kshipra River) and is one of the ancient monuments in Madhya Pradesh, India. Situated just 7 km from Ujjain, Bhartruhari Caves was the place where Bhartruhari, the step brother of King Vikramaditya, lived as a sage and meditated after being decided to give up his prosperous lifestyle. There is one small temple with a holy shrine inside these caves. A Shiva Linga can be seen inside a depression on the cave premises. Bhartrihari Caves are believed to have founded in 11th century AD. 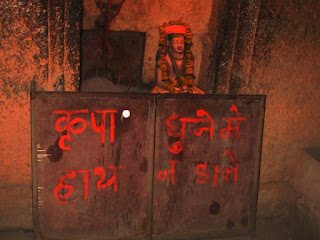 Bhartrihari was a scholar and a poet of his time. Some of his famous works were Shringarshatak, Vairagyashatak, and Nitishatak. All these creations highlight the well groomed usage of Sanskrit. The hermit Bhartrihari who had tremendous saintly powers prayed for years for the progress of the location and self-buried alive. It is believed that the temple in the cave is above his grave. Thousand of devotees visit Bhartruhari Cave Temples in Ujjain every year to pay tribute to the saint and also to have his blessings. It is said that by praying at this temple devotees can fulfill their dream, solve problems and cure fatal diseases.

The nearest airport to reach Bhartrihari Caves in Ujjain is the Devi Ahilyabai Holkar Airport in Indore, around 55 km away.