Goddess Lakshmi, who is the daughter of the king of the ocean of milk, whose abode is Srirangam (with Lord Ranganatha), who is served by all the divine ladies in heaven, who is the guiding light for the world, who has obtained the sustained (continued, everlasting) glance (Grace) from Brahma, Indra and Shiva, whose abode is the three worlds (Bhu, Bhuva, Suvaha) - I offer my prostrations to Thee, the beloved of Lord Krishna (Mukunda). 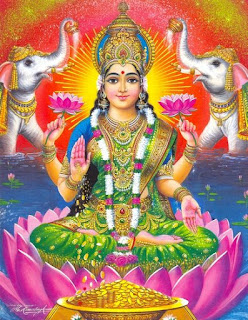