Posted by Abhilash MS
Madhyamaheshwar is the fourth Panch Kedar Temple constructed by Pandavas located at a height of 3497 meters in the charming green valleys of Garhwal Mountains in Uttarakhand, India. Also known as Madmaheshwar Temple, the deity here is Lord Shiva represented by a navel shaped Shivalinga made of black stone. The middle or belly part (Madhya) of the bull, regarded as a divine form of Siva, is worshipped here. Apart from this, two other small shrines are also found here, where Goddess Parvathi and Ardhanareeswara are installed. There is one small temple at the right side where a marble idol of Goddess Saraswathi is enshrined. 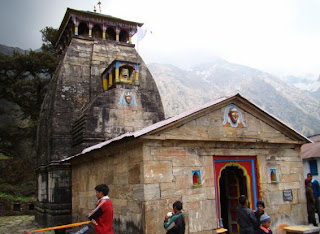 The snow covered Himalayan peaks that can be viewed from this location are Chaukamba, Neelkhanda and Kedarnath. The Kedar Hills or Kedar Massif provides magnificent views of the natural beauty of Himalayan glaciers. The watercourses in the surrounding areas are considered to be very holy and hence taken for ritual washing to establish divinity. The Kedarnath Wild Life Sanctuary which encircles the temple is the living land of different types of flora and fauna including the rare species of Himalayan Musk Deer (Kasturi Deer) and Himalayan Monal Pheasant.