The mountain peaks which stand encircling the temple are Nanda, Trishul and Ghundi. The sacred river Rudraganga which is considered as the “River Of Salvation” flows very close to Rudranath Shiva Temple. The holy water collections located near the temple are Surya Kund, Chandra Kund, Tara Kund, and Mana Kund. It is really spectacular to see this sacred location in the midst of mountain peaks dense forest and streams. 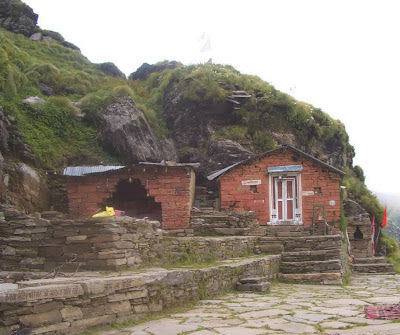 Devotees often visit Rudranath Temple to perform tribute to eternal souls of their departed relatives. As per beliefs, the offerings made to ancestors from this river banks are very holy. They can also worship the grey stone idol of Lord Rudranath located in the river.

According to local beliefs this place is protected by Vandevi or Vandevatas and hence this deity is also worshipped here. But the geographical peculiarity makes this place too difficult to reach. Thus, the visit to this temple will be a great experience to the devotees.

The annual festival celebrated at Rudranath Temple on the Pournami day of the Hindu month of Sravan (July – August) attracts devotees from all over Uttarkhand and the nearby states. The Rudranath Temple Festival usually coincides with Rakshabandhan Utsav.