Posted by Abhilash MS
Goddess Chinnamasta is considered as the Hindu God of courage and judgment, and comes in the fifth position among the 10 Mahavidyas. Chinnamasta is also known by the names Chhinnamastika and Prachanda Chandika. When compared to other Goddess she is believed to be in utmost furious form. Since she sacrificed herself by cutting the head she came to know by the name Chinnamasta. She is supposed to be the other form of Vajrayogini who had sacrificed by removing her own head. Chinnamasta also has cut-off her own head with a supreme sword and held the severed head in one of her hands. One of the three jets of blood that ejected out from her bleeding neck is directed to the mouth of her removed head whereas the other two blood ejections to the mouths of her associates. This signifies the spiritual success over desires by self control with powers of mind.

Legend or Story of Goddess Chinnamasta

There is an interesting story behind the incarnation of Chinnamasta. Once, Goddess Parvathi wet to have a bath in Mandakini River together with her two companions. After the bath the Goddess was thinking about the concepts of creation and life. Meanwhile, her two attendants became hungry and beg the Goddess for some food. She consoled and asked them to wait until they reached home. But when they started pleading again and again she cut off her own head from the neck region and made the blood to come out in three jet forms. One of these blood streams is entered in to the mouth of her severed head while the remaining two spurts are directed to the mouths of her companions which enabled them to quench hunger. After this sacrifice the Goddess Parvati is renowned as Goddess Chinnamasta. 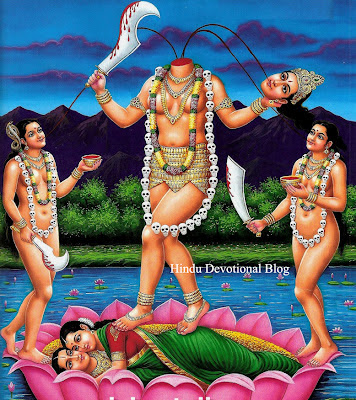 Goddess Chinnamasta is the insight of mystery and signifies spiritual truth regarding the fulfillment of worldly desires. In certain pictures she is depicted as standing on the body of a female who has been copulating with a male lying beneath her. It is from her navel that the divine Yoni Chakra is originated. Her body is covered by the four directions in place of clothes. She is believed to be eternal even though her head is removed from the body. Her two main qualities are highlighted by the features of her companions. The goddess is the image of sexual energy and her severed head is the symbol of inherent achievements. Her consciousness in creativity is represented by her garlands of skulls. For praying the Goddess Chinnamasta, different types of procedures are to be followed by the devotees.