Posted by Abhilash MS
Tirupati Venkateswara Temple, renowned as the richest Hindu Temple in the world, is a famous Lord Vishnu shrine located near Tirupati in Chittoor district of Andhra Pradesh, India. Also known as Tirupati Balaji Temple, the shrine is situated on a hill at Tirumala, a group of Seven Hills known as Seshachalam or Venkatachalam, at an altitude of 853 m (2,800 ft) above sea level. Hence the temple is also known as the Temple of Seven Hills. The presiding deity of the temple is Lord Venkateswara and is also known by other names such as Balaji, Srinivasa and Perumal. The temple is also one of the 108 Divya Desam of Mahavishnu. Tirupati is around 138 km from Chennai, 291 km from Bangalore and 600 km from Hyderabad.

Richest Temple in the World


Sree Padmanabhaswamy Temple in Trivandrum Kerala is currently regarded as the richest pilgrimage center after the temple treasure found in the secret cellars. Though no office reports have been declared about the wealth, people believe that the gold ornaments, coins and other antique assets will sum up to more than 21.72 Billion US Dollars which makes it the wealthiest temple  in the world. However, Tirupati Venkateswara Temple is still the most visited holy places in the world, with an average of 50,000 to 100,000 pilgrims visiting the shrine daily. 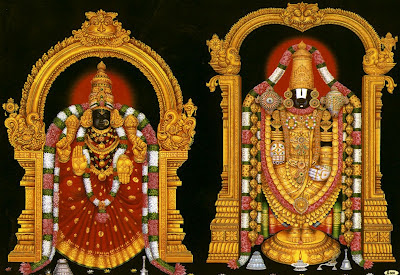 
Tirupati Temple is a 12th century Vaishnavite shrine which has a self-manifested idol murti of Lord Vishnu. The Lord is believed to have resided here for the Kali Yuga. The Gopuram or the tower of the temple is a classical example of the Dravidian architecture. Within the temple are the elegantly carved mandapams and doorways. The Cupola or the Sanctum sanctorum, called the Ananda Nilayam, is decorated with gold plates. The idol of the deity, Lord Venkateswara, has the features of both Vishnu and Shiva, the preserving and destroying aspects of the Hindu trinity.


The shrine has three enclosures known as Prakarams. The outermost one contains the Dhvajastambha post with the statue of Vijayanagara King Krishnadevaraya, and his consorts, and of Todarmal, a well-known minister of Akbar. Padi Kavali Maha Dwara, the main gate, has a quadrangular base. Figures of Lord Hanuman, Kevale Narasimha and Lakshmi Narasimha are depicted on the Dwara. The Ranga mandapam is built according to Vijayanagar style of architecture. Next is the Dhvajasthambha Mandapam which is a spacious complex. Tirumala Raya Mandapam is a complex with many pillars. An interesting aspect is that the central pillar is surrounded by pillars of smaller sizes. The smaller pillars produce musical sounds when hit with stones. Aina Mahal, located to the north of Tirumala Raya Mandapam, has a special seat or unjan. The Lord is seated in it before conducting worship services.


At Tirumala Temple, Tirupati Laddu is the most prominent prasadam. Other delicious prasadams such as curd rice, tamarind rice, vada and sweet pongal are also available. During Thursdays, the Tirupavadai seva occurs, and the food items are kept for naivedya to Lord Srinivasa.

An important ritual associated with Tirumala is tonsuring which means the act of shaving the head to please the God. Devotees offer their hair to the Lord which signifies removing of the ego.

The morning prayers start with Tirupati Venkateswara Suprabhatam at 03:00 AM in the morning. It means awakening of the Lord. Ekanta Sevam, held at night, means making the Lord to sleep.


Vaishnava festivals such as Vaikunta Ekadasi, Rama Navami and Janmashtami are held in great grandeur at Tirupati Venkateswaraswamy Temple. The Annual Brahmotsavam is celebrated every year during September is the most important festival in Tirumala.  Other major festivals include Vasanthotsavam (spring festival) conducted during March – April and Rathasapthami (Magha Shuddha Saptami), celebrated during February.

How to Reach Tirupati Temple

Tirupati is located at 67 km from Chittoor in the southern part of Andhra Pradesh. The nearest airport is at Renigunta which is 15 km from the temple. Nearest railway station is situated at Tirupati. Bus services are available from Tirupati to the temple.