Posted by Hindu Devotional Blog
Ajgaivinath Temple of Lord Shiva is located in Sultanganj, a town in Bhagalpur district of Bihar in India. Also known as Gaibinath Mahadeo, this is one of the rare ancient Hindu temples where the deity Lord Siva is existed as ‘Swayambhu’. Ajgaivinath Shiva Temple has been constructed on a rock which is projected out from the holy river Ganges. To reach here, there are boat services from Murli Hills of Sultanganj.


The ancient name of this holy place was Jahangira which derived from the name of the sage Jahnu who lived and meditated here years before. The current name Ajgaivinath is very much related to Mahadeva who had given up his bow called Ajgav at this location. This is how the name Ajgaivinath became popular nowadays.


Because of the presence of river Ganges, the pilgrimage to this temple is considered to be very holy. A portion of the river here is found intruded into the temple rock face. It is so attractive to view Ajgaivinath temple especially during rainy season. This is because of the splashing water in the river which washes the temple base. Hence the best season to visit here is from July to September. 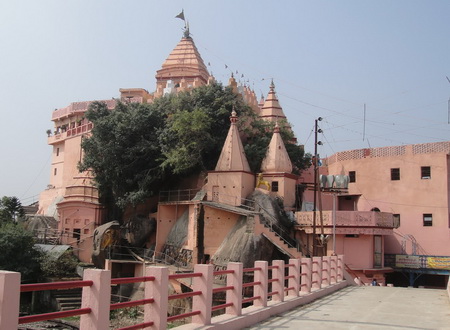 
Murli Hills Sultanganj is not only a traditionally important location but also a popular landscape. The rock sculptures, inscriptions and images seen here are spectacular and include Hindu, Buddhist and Gupta images. The sculpture dates back to the Pala period. They are excellent in appearance and assumed to be some of the rare varieties seen in India. The archaeological department has not made enough studies regarding the carvings seen in this temple premises.

Mahashiv Ratri, Ram Navmi and Ganga Dussehra are the major festivals celebrated at the temple.

Sultanganj Railway Station is on the loop-line of the Eastern Railways running from Kolkata to Kiul.