Posted by Hindu Devotional Blog
Dussehra Festival or Vijayadashami is one of the most important festivals celebrated in India and across the world by Hindus. Also known as Durgotsav, Dasara is more popular in India, Nepal and Bangladesh. Dussehra Festival celebrates the victory of good over evil in various occasions; which includes the victory of Durga Mata over demon Mahishasura, Lord Rama over Ravana, and of Goddess Durga over demons such as Chanda-Munda, Madhu-Kaitav, and Shumbha- Nishumbha. This year, the date of Dussehra festival is on 15 October 2021.

People of Hindu faith observe Dussehra through special prayers meetings and food offerings to the gods at home or in temples throughout India. They also hold outdoor fairs or melas and large parades with effigies of Ravana. The effigies of Ravana are burnt on bonfires in the evening. Dussehra is the culmination of Navaratri festival. Performing Ramlila, a short version of the epic Ramayana is a usual program in Northern part of India.

In South India, the nine preceding nights of Dussehra have been equally divided for worshipping the 3 primary Hindu Goddesses namely Goddess Lakshmi for the first three days for wealth and prosperity, Goddess Saraswati for the next three days for learning and arts and Goddess Durga for the last three days dedicated to Mother goddess or Shakti. On the day of Vijayadashami, ‘Vidya Aarambh’ is observed. The day is considered very auspicious, especially for the children to begin their education in academics as well as art. Saraswati puja is done on Vijayadashami. 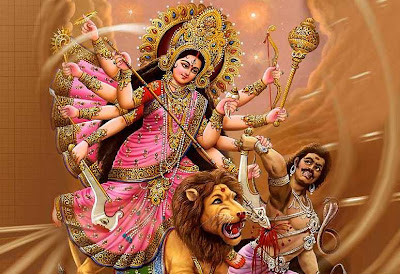 In East India, Vijayadashami is celebrated as the victory of Goddess Durga over Mahishasura, the demon who ruled Swargalok and the earth with his invincible power. In West India, on the last day of Navaratri, that is Dussehra, the idols installed on the first day of Navaratri are immersed in water. They exchange sweets with friends and relatives and also exchanging of leaves of Aapta tree is considered auspicious.

Hindus believe that it is lucky to start a new venture, project or journey on Dussehra. On this festival, people decorate the house and shop entrances with flower studded stings called Torans or Floral Gateways. At night, effigies of Ravana, Kumbhkaran and Meghanad are stuffed with firecrackers and set light.