Posted by Hindu Devotional Blog
Dvimukha Ganapati is regarded as the 27th among the 32 forms of Lord Ganesh. Dvimukha Ganapathi is represented as the lord with two faces, who could see all directions. He has a bluish -green color complexion with red silk attire and his beautiful jeweled crown adorns his appearance with four hands. In the main right hand holds his broken giving assurance to the devotees and in the upper right hand holds an elephant goad. In the main left hand holds a Ratnakumbha (pot of precious gems) and is upper left hand he holds a goad.

Thiruvonam or Shravana nakshatra is related to Dvimukha Ganapati. It is believed that worshipping this form will protect the devotees from all demons. Dvimukha Ganapati idol can be worshipped in Badrinath Temple in Uttarakhand. 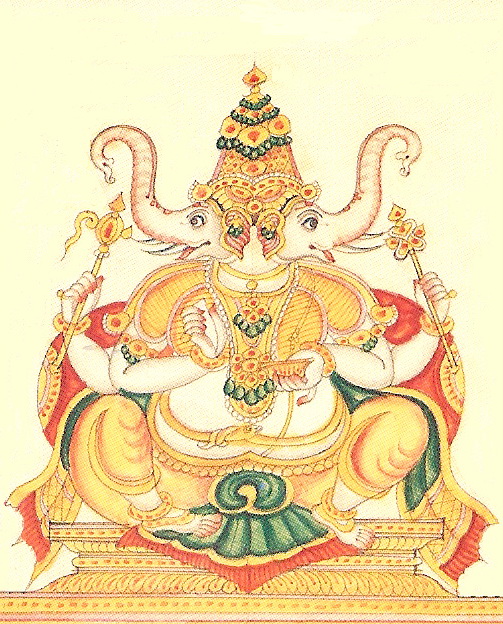 He holds in his hands his own tusk, a noose, a hook and a pot full of gems. His body complexion is greenish blue and he is wearing a red colored robe. A gem studded crown embellishes his head. May such Dvimuka Ganapati be gracious always!