Posted by Abhilash MS
Garuda is the Vahana of Lord Vishnu and is regarded as the King of Birds. Garuda bird appears in both Hinduism and Buddhist mythology. The birth of Garuda and his deeds can be seen in the first book of Mahabharata. Sage Kasyapa is the father of Garuda and Vinata, one of the 13 daughters of Daksha, is the mother of Garuda.


Garuda is depicted as a strong man with a white face and golden body having an eagle’s beak and red wings. Garuda is seen represented with a crown on his head. Garuda Purana, one of the Puranas in Hinduism, is dedicated to Hindu God Garuda.


Picture of Lord Vishnu and Goddess Lakshmi in Garuda Vahana 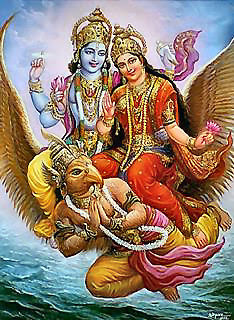 
The Statue of Garudalwar, the eagle vehicle of Lord Venkateswara, can be seen at the foothills of the famous Tirumala Venkateswara Temple in Andhra Pradesh. The Garuda Wisnu Kencana cultural park in the island of Bali in Indonesia has an 18 meter tall statue of Garuda.

Hindus consider the Brahminy Kite as the contemporary representation of Garuda. Garuda is spelled Karutan in Tamil language and Garid (Khan Garuda or Khangarid) in the Mongolian language.