Posted by Hindu Devotional Blog
Kalkaji Temple in Delhi is one of the most popular and oldest shrines situated in the capital city of India. It is located at Kalkaji which forms the southern part of Delhi and is devoted to worshipping Kalka Devi, which is the reincarnation of Goddess Durga. Believed to be more than 3,000 years old, Kalka Mandir is also known by the name ‘Jayanti Peetha’ or ‘Manokamna Siddha Peetha’. Durga Puja 2013 at Kalkaji Temple is celebrated this year from 9th to 14th October 2013.


Kalkaji Temple complex in Delhi is constructed of bricks and now it has been plastered with marble surrounded by a pyramidal tower. It is a 12 sided structure which has been completely built out of marble and pumice stones and is the Central Chamber of the temple. It is surrounded by a verandah which contains 36 arched openings which closes the Central chamber from all sides. Another sight capturing sight is the two red sandstone tigers placed on the marble pedestal. The inscriptions engraved in it are repeated and the language of the inscription is Urdu. Between the tigers, rests the stone image of Maa Kali Devi. 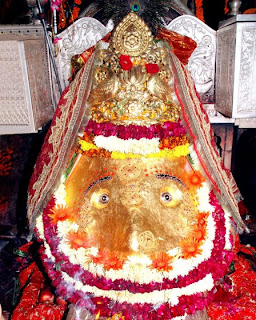 
It is said that the gods who were in the outset of the temple were disturbed by the devils and they approached Lord Brahma. He directed them to Goddess Parvati and the goddess gave birth to Kaushki Devi who killed the two devils. But as soon as the blood of the devils fell on the earth, thousands of devils came into life and Kaushki Devi had to fight hard against them. Seeing this Goddess Parvati decided to help Kaushki Devi and from the eyebrows of Kaushki Devi came Kali Devi whose mouth was so huge that the lower lip was on the hills below and her upper lip touched the sky and drank the whole blood of all the slaughtered giants, thus capturing complete victory over the enemies. Hence Maa Kali Devi decided to be here and from then onwards she is worshipped here as the main deity.


Devotees can purchase offerings from the entrance of the temple itself. Thousands and thousands of devotees gather here at the main festival of the temple which is the Durga Pooja. Huge fair is organized during the Navaratri festival for the devotees. The temple is believed as the holy shrine where the devotees get the blessings of Maa Kali to fulfill all their desires.


Prayers done here are very special as they are done for all religions together. Morning prayer timings are 10.00 to 10.15 AM, 12.00 to 12.15 PM. Evening prayer timings are 3.00 to 3.15 PM and 5.00 to 5.15 PM. The major ritual performed here is the offering of bathing the idol of Maa Kali with milk which is followed by the Aarti every morning and evening.


The temple is opened on all days except Mondays and there is no fee for admission, photography or parking. The temple catches the sight during the night with bright lights illuminating the temple and the atmosphere is very airy. Though the temple is ancient master piece it still holds a very modern and contemporary look.

The temple is located opposite to the Lotus Temple in Delhi and is accessible by all means of transport. The nearest airport is the Indira Gandhi Airport and railway station is the Nizammuddin Railway Station.