Posted by Abhilash MS
Sage Kashyap Rishi is one of the Seven Saptarshis in Hinduism. Sage Kashyapa or Kasyapa is an ancient sage and is regarded as the mind born son of Lord Brahma. Kashyapa Maharshi along with the other 6  rishis helped Lord Brahmadev in the creation of earth. Sage Kashyapa  is regarded as the father of the Devas, Asuras, Nagas and all of humanity. The vahana or Vishnu, Garuda is the son of Kashyap. The famous ancient scripture Kashyap Samhita or Braddha Jivakiya Tantra was written by Kashyapa Rishi. 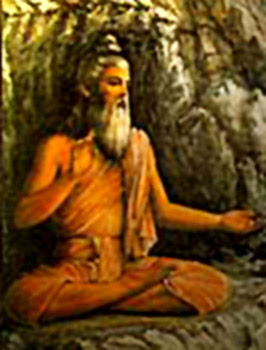 1) With his first wife Aditi, he fathered  Agni, the Adityas, and the Vamana avatar of Lord Vishnu.
2) Hiranyakashipu, Hiranyaksha and Sinhika were the children of Kashyapa with his second wife Diti.
3) From his wife Vinata, he fathered Garuda and Aruna.
4) The Nagas or serpents are his sons from Kadru.
5) The Danavas are his sons from Danu.
6) According to the Bhagavata Purana, the Apsaras were born from Kashyap and his wife Muni.
7) According to Uttar Ramayana, Kashyap's with his second wife Diti also had a son named Maya, who is regarded as the Lord of Daityas (a clan or Asura)
8) Snake Vasuki, the King of Nagas, is the eldest son of Kashyapa and Kadru