Posted by Hindu Devotional Blog
Sree Padmanabhaswamy Temple is one of the most famous Lord Vishnu Temples in Kerala, South India. Also known as Sree Ananda Padmanabhaswamy Temple, this Mahavishnu Temple is located inside East Fort, in Thiruvananthapuram - the capital city of Kerala, India. Lord Vishnu is enshrined here in the Anananthasayanam posture (in eternal sleep of yognidra), lying on Sri Anantha, the hooded snake. According to traditions, Sree Padmanabhaswamy Kshetram is believed to have been worshipped by Lord Chandra (Moon God) and Lord Indra (the head of the Devas). The temple recently became popular all over the world after the findings of Gold Treasures in the secret cellars.

In the 108 Divya Deshams, or the holiest shrines of Lord Mahavishnu, the idols of Lord Vishnu are in one of the three different postures – reclining, sitting, or standing. Lord Padmanabhaswamy is enshrined here in Anananthasayanam posture (in eternal sleep of yognidra). The main idol inside the sanctum sanctorum and viewed from three doors is in the reclining posture. In the left end door, devotees can see the face and upper body of Lord Padmanabha; from the middle door one can worship the nabhi (abdomen) part, where devotees can also see Lord Brahma, Goddess Lakshmi Devi, and the Utsava Murthi idol, along with Goddess Bhoodevi and Goddess Sridevi. 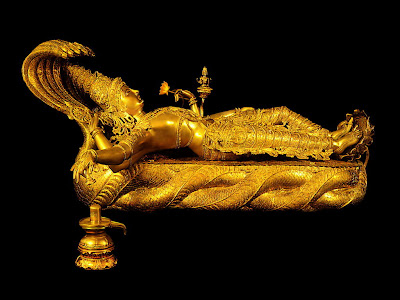 There are lots of beautiful painting and murals all over the inner walls of the sanctum sanctorum of Sri Padmanabhaswamy Temple. Some of the noted paintings include Goddess Astha Lakshmi, life size pictures of Lord Vishnu’s Anananthasayanam, Narasimha Swamy, Ganapathi, Gaja Lakshmi, and Aswarooda Lakshmi Devi.

Sree Padmanabhaswamy Temple can easily be accessed by road being its ideal location near the Trivandrum City Bus Station in East Fort, Thiruvananthapuram. The inter-state highway, National Highway 47 (NH 47) connects Thiruvananthapuram to all major cities and nearby states including Kollam, Ernakulam (Kochi), Thrissur, Nagercoil, Coimbatore, Kanyakumari, Chennai, and Bangalore.

Trivandrum International Airport is the nearest airport to reach Sree Padmanabhaswamy Temple. The airport is just 7 km from the temple.