Posted by Hindu Devotional Blog
Snake Vasuki is the king of Nagas and is closely associated with Hindu God Shiva. Vasuki Naga is the snake who adorns the neck of Lord Shiva. Vasuki is the eldest son of Sage Kashyapa and Kadru. Mansa Devi, the goddess of Snakes, is the sister of Vasuki. Vasuki has a magnificent gem known as Nagamani adorning his head. Vasuki Naga is worshiped by both Hindus and Buddhists. Nag Panchami is the main festival dedicated to Vasuki. The Snake King is also worshiped by Hindus on all Naga Pujas and on Aayilyam nakshatra.

Hindu puranas states that Vasuki became the string of the bow of Tripurantaka (an incarnation of Shiva) to destroy the triple fortresses, Tripura, of the Asuras.

Vasuki also played an important role in Samudra Manthan. He wrapped around Mount Mandarachala and allowed the devas and the asuras to use him as the churning rope to extract Amrit from the Ksheera Sagara Mathanam (ocean of milk). 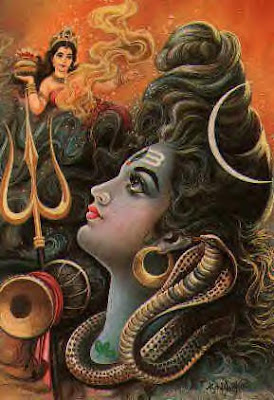 Vasuki is one of the “Eight Naga Kings” according to Japanese and Chinese mythology. The others seven snake kings are Nanda (Nagaraja), Upananda, Sagara (Shakara), Takshaka, Balavan, Anavatapta and Utpala.