Posted by Hindu Devotional Blog
Giant Buddha of Leshan in China is the world’s tallest and largest statue of Lord Buddha. This tallest stone Buddha statue in the world is situated at Leshan city in the southern part of Sichuan province in China. The famous Mount Emei lies opposite to this stone sculpture which is carved out of Lingyun Hill. The rivers Minjiang, Qingyi and Dadu are flowing between these two elevations. Thus, the site has become one of the naturally beautiful places in the world and is visited by thousands of tourists and Buddhists. In 1996 this area is included among the world heritage sites by the UNESCO.

This colossal Buddhist structure was constructed in AD 713 during the Tang Dynasty. The proposal to built the statue was put forth by a Chinese monk named Haitong. According to him such a Buddha statue could normalize the unstable water which disturbed the shipping vessels in the river. His ideas were not mystic, but absolutely scientific. The remains formed while sculpturing the rock were fallen into the river and normalized the water flow by controlling the undercurrents. 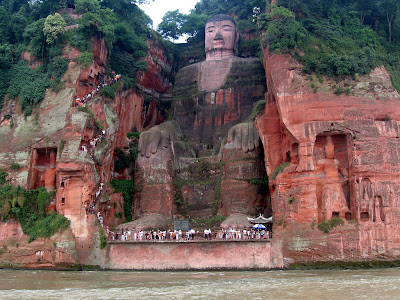 Leshan Buddha statue which overlooks the Leshan city has a unique expression in its face which resembles the tranquility prevailing in the valley. Also known as Dafo, the height of this statue is 71 meters whereas the distance between the outer shoulders 28 meters. Head is 4.7 meters long with width 10 meters. The head of this idol is tall enough to reach the top of steep rocks here and the two long arms are found resting on knees.

On viewing this remarkable structure every Buddhist have an intuition to pray on their knees for eternal grace. Inside the colossal sculpture there are passages to wipeout the water content which may enter during rainy season. Previously there was a thirteen storied wooden structure to protect the giant statue from dews, sunshine and rain which lost after years. Nevertheless it has survived severe erosion and weathering in all these periods and still stands as an existing wonderful construction.