Ganesha and Origin of Kaveri River

Posted by Abhilash MS
Story of Origin of Kaveri River and Ganesha. There is a legend behind the origin of river Kaveri which is very much related to Lord Ganesha and sage Agastya. According to this, the distinguished saint was very sorry to see the barren southern region of India. So he approached Lord Brahma who directed him to seek the help of Lord Shiva. Pleased by the sacraments of sage Agastya, Lord Siva appeared before him. To fulfill his divine intentions Lord Siva poured some sanctified water into his pot and advised to utilize the same at a suitable place in the south. When the sage Agastya reached Kudaku Mountains he saw a boy on the way. It was time for Agastya to meditate and he wanted to be fresh. So he asked the boy to guard the pot containing water till his ritual was over.

The boy was disguised Ganesha whose goal was to help sage Agastya for discharging the pot of water at a sacred place. Thus he placed the vessel on the right spot and left the venue. When the sage returned the boy was nowhere and saw a crow sitting on the edge of the pot. He tried to send off the bird and in this attempt the pot turned down and the water content oozed out as a continuous flow giving rise to holy Kaveri River. To support this mythology there is a temple with three shrines where idols of Lord Shiva, Lord Ganesha and sage Agastya are consecrated. The pond situated here is fed by the same spring that feeds river Kaveri. The importance of this temple has made Talakaveri a renowned Hindu pilgrim center. 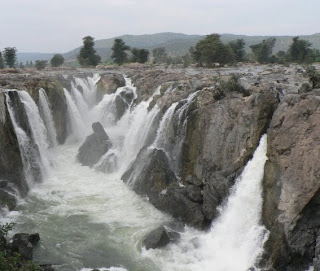 River Kaveri is the longest water source in south India and as sacred as River Ganga in the north. Kaveri River originates from Bhramagiri ranges in Western Ghats which belongs to the Kurg district in Karnataka state. The naturally beautiful landscape is called Thalakaveri and locates about 1280 meters above sea level. Here, the fog embedded atmosphere add glorious luster to the environments and makes the sightseeing extremely mesmerizing. The origin of the watercourse is from a spring in the mountains which flows underground for about one kilometer and then emerges out as River Kaveri. The flow of the river has promoted the growth of spices, palm trees and other green vegetation along its entire route through Karnataka and Tamil Nadu states. Kaveri River covers a distance of 765 km before it merges with Bay of Bengal.