Posted by Abhilash MS
History of Mysore Dasara Festival, the Nadahabba or state festival of Karnataka, India. The festival is a 10 days festival celebrated during Navaratri Festival. The main tourist attraction of Mysore Dasara festival is the Mysore Palace which is illuminated with nearly one lakh bulbs from 7 PM to 10 PM on all the ten days of the festival.

The long tradition of celebrating the Dasara festival can be traced back to the Vijayanagar dynasty in 15th Century. After the fall of Vijayanagar Kingdom, The Wodeyar's of Mysore continued the Dasara Festival in the year 1610 at Srirangapatna. Colorful and religious celebrations were held under the leadership of Raja Wodeyar.

Dasara festival is also known by other names such as Durgotsav, Dashahara, and Vijayadashami, Vijaya Dashami, Vijaydasami Dashain. Dasara literally means the tenth day and it marks the end of the nine days of Navratri. Legend has it that Vijayadashami denotes the day when Goddess Chamundeshwari killed the demon Mahishasura. It was from the name of Mahishasura, the name Mysore has been derived (The name Mysore is an anglicised version of Mahishuru, which means the abode of Mahisha). 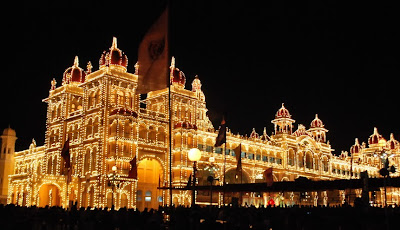