Posted by Abhilash MS
Mariamman Temple in Vietnam is a famous Hindu Temple located at Ho Chi Minh City (formerly Saigon), the largest city in the country. This 19th century Goddess Mariamman Temple was built by the traders from Tamil Nadu, India known as Nagarathar. Though the temple was built to serve to the Chettiar community in Vietnam, nowadays most of the devotees are Vietnamese or Chinese who experienced the powers of Mariamman.


The temple has seperate shrines of Lord Ganesh and Lord Muruga. The temple rajagopuram is around 12 meters high and contains a number of statues of Hindu Gods and Goddesses. Some of the main statues are Goddess Meenakshi, Birmasakthi, Indira Durgai, Birman (Brahma), Samundi, Mageswari, Andal, Lord Shiva, Paramasivam, Kanniga Parameswari, Kaliyamman, Bhuvaneswari, Murugan, and Mahavishnu.

The temple timings are from 7 AM to 7 PM. Fridays are considered important and holds a special ritual from morning to late evening. 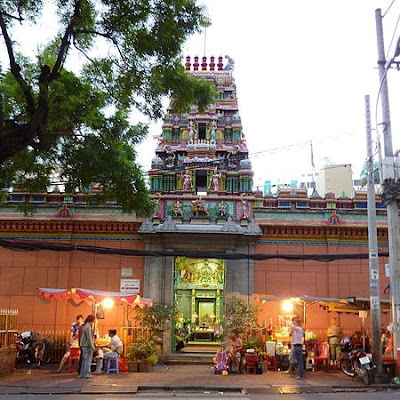