Posted by Abhilash MS
Temple of Heaven or Altar of Heaven, is a complex of religious buildings located in Beijing, the capital city of China. This architectural masterpiece is the contribution of Ming dynasty who ruled China in 15th century. The emperors of this dynasty assumed that they were the sons of heaven and this building was their forfeit to the almighty living there. Since their reign was very much inclined to feudal system, they preferred to display their stateliness and authenticity on this noble structure.

According to their belief this building was to signify the relationship between earth (human world) and heaven (God’s World). This trendy complex which is the outcome of a thoughtful architectural planning is in the midst of a landscape garden surrounded by pinewood trees. All constituents necessary to display the supremacy of the shrine are included in the concerned temple premise. Thus this amazing structure renders a spectacular view with the background of culture and tradition of ancient Chinese people. The Temple of Heaven was listed as a UNESCO World Heritage Site in 1998.

The Temple of Heaven which covers an area of 270 acres is enclosed by a long wall. The northern portion of the shrine is semicircular in shape whereas the southern in square. The semicircular architecture stands for heaven while the square signifies earth. This pattern also supports an ancient Chinese assumption that Heaven is round and Earth is square. In this construction, the section of heaven is positioned above the earth.

The main structures of the monument are located at the southern and northern ends of the central axis. These outstanding constructions include Circular Mound Altar, Imperial Vault of Heaven and Hall of Prayer for Good Harvest. Apart from these, there are additional structures called Echo Stones and Echo Wall. All buildings inside the shrine are connected by a wide bridge called Vermilion Steps which is considered as the holy way. A design of ‘Nine Dragon Cypress’ is the other significant attraction of this temple. 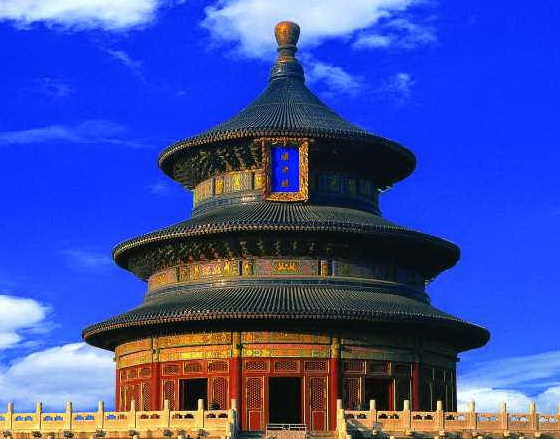