Posted by Abhilash MS
Nava Durga Stuti is a Hindu prayer addressed to Navdurga or the 9 forms of Goddess Durga. Navdurga Stotra is one of the main mantras to be recited during Navaratri Festival. The English meaning of each Navadurga mantra are given after the lyrics.

I salute the mother of the universe,who created the world,
Who is saluted by the world, who is personification of all powers,
And who as Kaumari is in all the beings of the world.

I salute the goddess is the trinity, who destroyed three cities,
Who is the basis for the three fold division of characters,
And who is saluted by all beings of the three worlds

I salute the Goddess who is forever auspicious,
Who is mother Kali, who is beyond measurement of time,
Who is consort of Shiva in the hearts of auspicious people,
Who is the mother who is auspicious and divine.

I salute Goddess Kamakshi who is the basis of the nine occult powers like Anima,
Who has eyes similar to fish and who is the endless power of division

I salute Chandika the goddess of all devas,
who is a fierce warrior, Who is the fierce illusion.
Who killed the asuras called Chanda and Munda,
And who is valour is greatly fierce

I salute the consort of Shiva who blesses with joy and pleasure,
Who is saluted by all Devas and who is in all beings.

I salute the Goddess of devas, who is a fierce warrior,
Who is the fierce illusion, who killed Raktha Bheeja,
Who is death even to God of death and is very good.

I salute the great white Goddess, Who is pretty and has a golden body,
Who blesses us with pleasure and luck and gives us joy

I salute with perennial devotion Durga who removes sufferings,
And who removes fear and danger in difficult and impossible acts 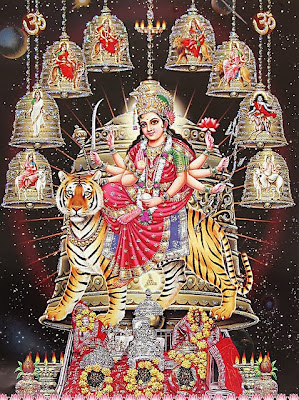