Posted by Abhilash MS
Goddess Kalratri or Maa Kala Ratri is one of the fiercest forms of Goddess Durga Maa. Devotees perform pooja to her on the seventh day of Navratri Festival. The goddess is named Kalaratri as she is dark in color. This form of Durga is the destroyer of all demons, evil spirits, and negative energies. Worshiping the goddess helps to destroys ones ignorance and removes darkness in life.
Appearance


Durga Kalaratri is also known as Shubhamkari. The goddess is depicted with four hands and three eyes. Her left two hands carry a thorn like weapon and dagger. Her two right hands show Abhaya Mudra and Varada Mudra. A donkey is the shown as the vahana of Kalaratri Mata. The necklace of Devi shines like the moon.

According to Skanda Purana, Goddess Parvati Maa removed her golden outer skin and becomes dark complexioned before destroy the demons Shumbha and Nishumbha. Hence she is known as Kalratri. 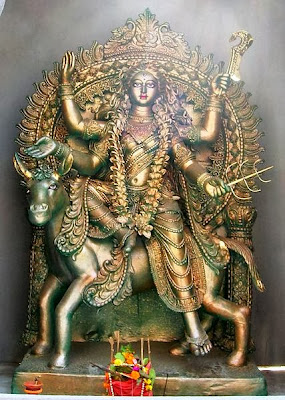