Posted by Abhilash MS
Goddess Katyayani is one of the main Hindu goddess worshiped on the sixth day of Navratri Festival. Katyayani Devi is one of the Navadurga forms and took birth as the daughter of Sage Katyayan born in the Katya lineage. Details about Katyayani Mata can be seen in Devi-Bhagavata Purana, Markandeya Purana, Varaha Purana, Skanda Purana and Vamana Purana. Goddess Katyayani is regarded as a Warrior goddess who took birth to destroy demon Mahishasura.


Maa Katyani has three eyes and her vahana is the majestic lion. Goddess Katyayani is depicted as having four, eight, ten or 18 arms. The most common representation is with four arms – one hand holds the shining Chandrahasa (longsword) and the other carrys a lotus flower. The other two hands are in Abhaya Mudra and Varada Mudra.


According to puranas Shiva, Vishnu, Brahma and other demi gods has presented her with various weapons to destroy demon Mahishasura. These weapons are displayed when the goddess is depicted with more arms.


Goddess Kanya Kumari Devi of Kanyakumari Temple is said to be an avatar of Katyayani Maa. Katyayani Peeth Temple in Vrindaban; Katyayani Baneshwar Temple in Karnataka; and Katyayani Temple in Kolhapur Maharashtra are important temples dedicated to the goddess. 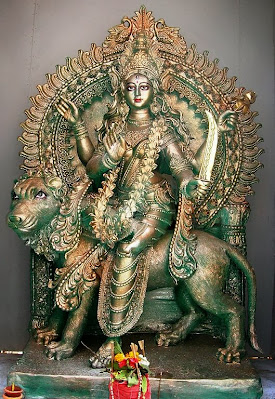