Posted by Abhilash MS
Goddess Kushmanda is worshiped on the 4th day of Navratri Festival. Kushmanda Maa is one of the Navadurga forms of Durga Maa. According to Hinduism, the Goddess created the Brahmanda (universe) by mere laughing. She resides in solar system and shines brightly to provide energy to the sun in all the ten directions. The literal meaning of the name “Ku-shm-anda” is that ‘Ku’ is ‘A little’; ‘Ushma’ is ‘Warmth’; and ‘Anda’ is ‘The cosmic egg’.


Goddess Kushmanda is depicted with Ashtabhuja or eight hands. She is seen riding on a lion. In her four right hands she holds a Kamandul, Padma (lotus), Dhanush (bow), and arrow. While the four left hands hold the Sudarshan Chakra, Amrit Kalash, Gada (mace), and Japamala (rosary beads). The goddess is usually represented with a red color saree and green blouse. 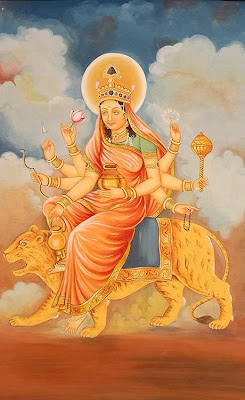