Posted by Abhilash MS
Benefits of Hanuman Worship. Anjaneya is an important God in Hinduism. An ardent devotee of Rama, Hanuman has got a blessing from Sri Ram that he will be worshiped wherever Rama is worshiped. Hanuman, the son of Kesari, is also regarded as an incarnation of Lord Shiva. Here is the importance of Hanuman pooja and worship:

It is said that Hanuman Pooja is beneficial for all those who want to attain strength, wisdom and knowledge. Worshipping Lord Hanuman cures all illness and gives courage to fight the illness and it is also done to have peace of mind. The importance of doing Hanuman pooja lies in the fact that the Pooja will clear mind and have good thoughts. Another important benefit is that Lord Shani Dev had promised Hanuman that those who prayed Anjaneya would be rescued from the ill effects of Saturn. So people who are suffering from Shani Dosha should worship Hanuman to get rid of any malefic effects of Saturn.

Tuesdays and Saturdays are considered auspicious days for Hanuman worship. Some people do pujas on Thursdays also. People keep fast in honor of Hanuman and give special offerings to him. Once in every year on the full moon day of the Hindu month of Chaitra (April - May) at sunrise, Hanuman Jayanti is celebrated to worship the birth of Lord Hanuman. At some places Lord Hanuman is worshipped with five faces called the Panchamukha Hanuman. The five faces are of an eagle facing West, a boar facing North, a horse facing up, a lion facing South and one His own Hanuman facing East. The Panchamukha Hanuman has ten arms and holds as such ten weapons in each hand. 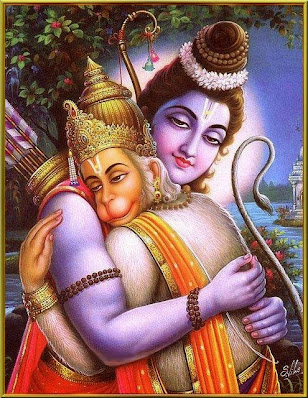 The character of Hanuman teaches us the unlimited powers that lie unused within each one of us. His undying devotion to Lord Rama made him such that he became free from all physical fatigue and Hanuman’s only desire was to go on to serving Rama. The bonding between Hanuman and Lord Rama shows the real bond between a master and a servant. His greatness lies in his complete merger with his Lord, which became the basis of his inborn qualities.