Posted by Abhilash MS
Peepal Tree (Ficus religiosa or Sacred Fig) stands more important than any other sacred trees in India. It has a lot of significance in the Hindu religion. Peepal known as ‘Ashwattha’ in Sanskrit is a very huge tree and has light grey color bark. The leaves are heart shaped and have long tapering tips and even the slightest breeze can make it rustle. And they give an impression of coolness it is considered to possess health giving properties. When ripe the fruit is purple in color. Peepal Tree is also known as Peepul, or Pippal or the Bo-Tree - from the Sanskrit “Bodhi” which means wisdom or enlightened.

Peepal tree is preferred to be touched only on Saturdays. It is believed that Ashvatha and Peepala, the two demons who harassed people were killed by Shani. According to Brahmins, peepal tree has a very important place in their daily rituals and Hindu scriptures say that the ‘Asuras’ had driven out gods and goddesses from Heaven and they had to take shelter under the peepal tree. Women ties red thread on the trunk of the tree to bless them with a son. Since there is a belief that Goddess Lakshmi sits under the Peepal tree and hence it is worshipped on the month of Shravana. 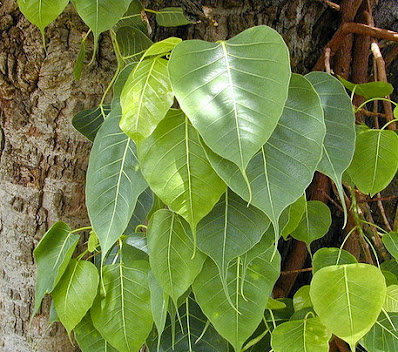 Peepal trees are usually planted on the east of the house or temple. A round platform is constructed around the tree and then worshipped. Peepal tree are also worshipped with ‘naga’ or a snake idol, kept under them. It is believed that then the devotee is blessed with wealth. If widowhood is predicted in a girl’s horoscope she is first married to a peepal tree and then allowed to remarry. There is also a custom of a marriage ritual that happens between peepal tree and neem tree. It is believed that the fruit of neem represents the Sivalinga and Leaf of the peepal represents yoni. The fruit is placed on the leaf which symbolizes creation through sexual union and so two trees are married.