Posted by Abhilash MS
Pradakshina or Pradakshinam which means circumambulation refers to walking around the sanctum sanctorum, the main chamber of the shrine which houses the temple deity. This is an important form of Hindu worship in India. The devotees walk around sacred fire (Agni), trees and also plants such as Tulsi plant and Peepal tree. Pradakshina, which is done usually in a clockwise direction, is performed after the completion of traditional worship (puja) to the deity. Pradakshina literally means to the right. The pathway made around the shrine is called the Pradakshina path.

It is believed that the Lord is the center and source of our lives and so recognizing him as the central point in our lives, devotees involve in doing daily tasks. Similar to the solar system which involves the sun at the center around which the planets rotate; Pradakshinams are done with god at the center.

Adi Sankaracharya says that real Pradakshina is the meditation that thousands of universes are revolving around the Lord who is the centre of all forms. 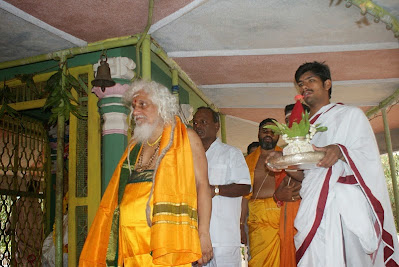 A popular legend signifies the importance of Pradakshina. Legend says that Lord Shiva once wanted his two sons, Ganesha and Subrahmanya, to walk around the universe in order to get worldly experience. It is said that Lord Subrahmanya spent many years traveling the world on his peacock. However, Ganesha walked a circle around his mother and father and is believed to have explained that the world is contained within Lord Shiva and Goddess Parvathi and he had encircled the world.

The number of times a devotee needs to do Pradakshina for each deity is different. According to Swayambhu Agama, doing Pradakshina 21 times to any deity is sanctified.