Posted by Abhilash MS
Panchayatana Puja is the type of pooja or worship followed in Smarta tradition of Hinduism. The Smartha sampradaya was introduced by Adi Guru Adi Shankaracharya. According to this tradition, the Supreme God worship consists of the worship of five deities Lord Ganesha, Lord Shiva, Lord Vishnu, Shakti or Devi, and Lord Surya. As puja is performed to five deities, it is known as Panchayathana Puja (Pancha means Five). 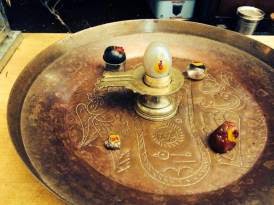 In this form of worship, according to the family tradition, one deity is kept at the center and the other four deities surrounding in four corners. Usually the Ishta Devata of the family will be kept in the center. Worship is offered to all the five gods usually represented with small murtis or by five marks drawn on the floor. If Shiva is kept in center then it is known as Shiva panchayata; likewise the other four types of panchayata puja are Vishnu panchayata, Surya panchayata, Ganesha panchayata and Devi panchayata.

In Panchayatana puja, no strict rules need to be followed. Pooja is performed either in the mornings or evenings. Chanting of Sahasranama, Astottara shatanamavali or any stotras of one or all the five deities are performed. Naivedya and Aarthi will be offered to the deities.