Espying the hoard of asuras who came again,
The devas were filled with sense of fear
And started praying to Lord Vishnu

Our salutations to him, who holds a mace,
Conch and lotus in his hand,
Salutations to him who took different forms
Like fish and boar to save the world,
Who is always the destroyer of sorrows of his devotees,
And who is himself creator, organizer and destroyer.

We salute again and again that God,
Who is the consort of Goddess Lakshmi,
Who is the killer of all asuras,
Who rides on the Garuda,
Who wears yellow silk,
Who grants the results of sacrifices,
Who himself does not do any actions,
And in whom we should seek protection. 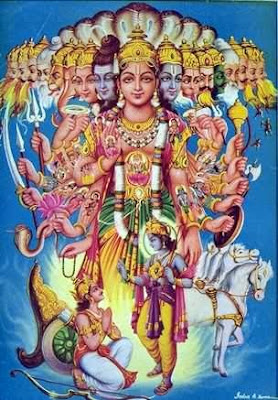 We salute again and again that God,
Who is the Vishnu who is like the diamond weapon which cuts,
The mountain like sorrows of devas due to asuras,
And who sleeps on the great snake,
And who has sun and moon as his two eyes.

He who reads this stotra called, “removal of sorrow”,
Will never again suffer sorrow due to the grace of Hari