Posted by Abhilash MS
Saranyu or Saraniya is the wife of Lord Surya, the Sun God. Also known as Sanjna, Sangya or Ganga, Saranyu is regarded as the Goddess of clouds in Hinduism. She is often associated with the Greek goddess of agriculture, Demeter.

Saranyu and Surya are the parents of Ashvins or Ashwini Kumaras, and the twins Yama and Yami. Ashwinis are divine horsemen and physicians to the Devas. Yama is the God of Death and Yami is Hindu goddess and sacred river called Yamuna. Sanjna Devi is also the mother of Vaivasvata Manu, the seventh and present Manu. Chhaya Devi is the shadow-image or reflection of Saranyu. 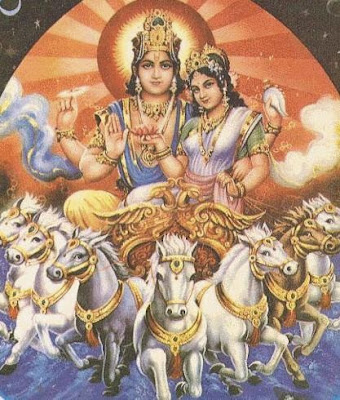 Viswakarma is the father of Goddess Saranyu.