Posted by Abhilash MS
Sharanga is the bow weapon of Lord Vishnu. Vishwakarma, the presiding deity of all architects, crafted this bow along with the Pinaka bow of Lord Shiva. Mahavishnu is depicted with other weapons including Sudarshana Chakra, Kaumodaki, Nandaka, and Panchajanya Shankha. 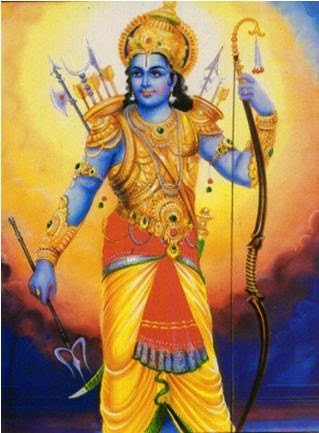 Lord Vishnu gave the Sharanga bow to sage Ruchika. The bow later came in to possession of Lord Parashurama, the grandson of Ruchika muni. Parasurama handed it over to Lord Rama, the seventh avatar of Vishnu. Sri Rama after completing his life’s mission gave it to Varuna, the god of water and ocean.

In the Mahabharata, Varuna gave Sharanga to Lord Krishna during the Khandava dahana. Krishna, just before his death, retuned the bow to Varuna by throwing Sharanga back to the ocean.

Mentioning of Sharanga can again be seen during the fight between Lord Krishna and demon Shalva.