Posted by Abhilash MS
Vibhuti is considered as one of the most scared objects in Hinduism. Hindu religion, one of the ancient religions of the world, considers some objects to be immensely holy and these objects play a central role in the rituals. Also known as Bhasma or Trineru, Vibhuti is the sacred ash which is predominantly used by the devotees of Lord Shiva or the Shaivite sect of Hindus.

Origin of the Sacred Ash

The sacred ash or vibhuti is mainly made from burnt wood from Āgamic rituals. The wood is usually burnt in a sacred fire called Homa which is generally made during a Yagna. Ascetics or sadhus generally collect vibhuti from the cremation grounds.

Since ancient times, one of the most traditional ways of making vibhuti is from dried cow dung, made in the Vaideeka mode during the Mahashivaratri festival, which comes once every year. The cow dung cakes are laid inside a pyramidical structure made up of semi-grown paddy or Karukkai. This process is called Sivarathri muttan. In the morning or Mahashivaratri, the Viraja Yagna is performed and after the yagna is completed, the fire is put on the muttan and after some days when it is burnt out, the burnt cow dung is used as Vibhuti. 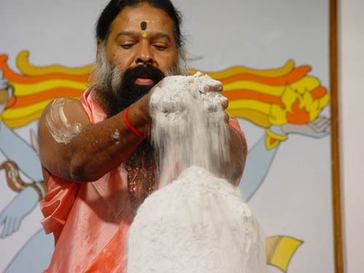 Vibhuti is generally smeared on the forehead, between the two eyebrows. When it is smeared between the two ends of the eyebrows, it is called Tripundra. Apart from the forehead, vibhuti is also applied on the chest where the two parts of the rib cage meets or at the pit of the throat. Other parts of the body where vibhuti might be applied include the scalp, the toe, knees, stomach, arms elbows and other parts of the body. It is generally believed that the true devotee of Lord Shiva should smear his body with vibhuti and the vibhuti should remain at all times, just like it remains on Lord Shiva himself.