Posted by Abhilash MS
Hindu God Brahma is regarded as the God of creation among the Trimurti of Hinduism. Brahma is also known as Vagisa or the God of Speech and the creator of the four Vedas. As per Hindu mythology Brahma Deva was born from a Kamala or lotus springing from Vishnu’s navel and created the world through Saraswati.

According to Manu Smriti, the self existent Lord manifested to dispel darkness surrounding the universe. He created the waters and deposited a seed that became a golden egg from which he was born as Brahma. He divided the egg into two parts to construct the heaven and earth and created ten Prajapatis, mind born sons who completed the work of creation. By a third account, the Lord separated himself into two parts, the male and female after dividing the golden egg.

Hindu epic Ramayana says that Brahma sprang from  the ether and that sages Marichi, Atri, Angiras, Narada, Sanaka, Sanandana, Sanatkumara, Sanasujata and others are his ‘manasa putras’. 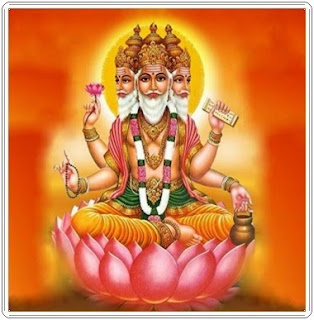