Birth and Marriage of Rukmini

Posted by Abhilash MS
Birth and Marriage of Rukmini - the wife of Lord Krishna. Though born of earthly parents, Rukmini was always considered the incarnation of Goddess Lakhsmi (the Hindu god of wealth). She was born at Haridwar and was the princess of the Aryan tribe as per the Vedas. When Rukmini reached Dawrka with Krishna and their marriage took place, the natives of Dwarka were overjoyed to see their Lord married with his supreme wife. Rukhmini was not only his first wife but also his principle wife who took the greatest place among all his other succeeding wives.

Bhismaka who was Rukmini’s father, was the vassal of the powerful king Jarasandha of Magadha. Though she was in love and completely devoted to Krishna since a very early age, her brother Rukmi who was a friend of the evil King Kansa, was against the alliance as he hated Krishna. Though her parents wanted Rukmini to follow her heart and marry Krishna, Rukmi was against it and wanted Rukmini to marry Shishupal, the prince of Chedi. Rukmini on knowing this, secretly wrote a letter to Krishna asking him to kidnap her on her way to the temple and claim her as his wife. She handed the letter to one of her trusted companions and asked her to take the letter to Krishna in Dwarka. When Krishna received the letter he immediately set out for Vidarbha (place where Rukmini lived) with Balarama. During the fights and kidnapping, Krishna duelled with Rukmi and defeated him. But, on Rukmini’s request he spared his life. Later the couple got married at Madhavpur where we have a temple today in memory of this holy marriage between two divine souls. 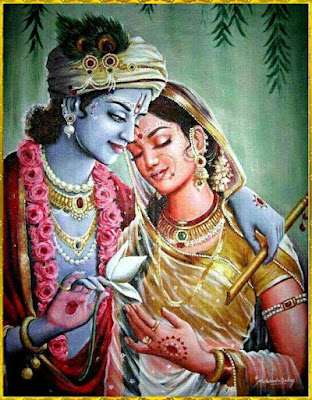