Posted by Abhilash MS
Kashyapa was one of the Saptarishis and is also an acclaimed author who wrote the Kashyapa Samhita. This book is considered a classical reference book on the Ayurvedas, obstetrics and gynecology. Kashyapa is said to be the wish-born-son of Lord Brahma.

Kashyapa has several wives all of whom were the daughters of Daksha Prajapati. His wives gave him some very popular sons in Hindu mythology. His wives were namely Diti, Aditi, Arishta, Kadru, Vinata Danu, Kalaka, Khasa, Krodhavasa, Muni, Puloma and Somathi. Additionally, he also married Syeni who gave birth to Jatayau, the great bird and also Unmathi who gave birth to Sampati, another gigantic bird. It is interesting to note that rishi Kashyapa’s sons were the pioneers of several tribes. His sons begot by Aditi, went ahed to start the solar dynasty. 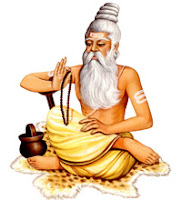 The valley of Kashmir was named after Kashyapa Rishi. The region initially has several lakes called satisaras named after Lord Shiva’s first wife Sati. A demon named Jalodbhav inhabited the lake region. The nagas and pishachas were the two tribes that inhabited this region. The leader of the Nagas, Ananta drained the entire lake to capture the demon. Later he named the lake after his father Kashyapa.