Pragat Santoshi Mata Temple has a modern architecture style. Inside the temple, there is a large compound that is surrounded by the temple buildings. The temple compound has a big bell, which is known as Virat Ghant, which has a religious significance. The entire compound is coloured white which reflects the purity and chastity of the shrine. 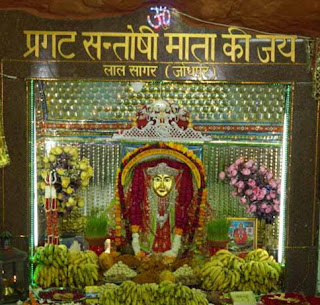 The surrounding geography of the place is also quite interesting. There is a hill adjacent to the temple which rises above the temple and it looks like Sheshnaag or the divine snake is giving shade to the Goddess. The temple also has a lake nearby which has a tree which has remained the same all over the years. There is a waterfall nearby where the idol of Lord Shiva is established and worshipped with great devotion. It is believed that Lord Shiva fulfils all the wishes and desires of everyone who prays to him. The temple also has an idol of Hanuman.

Location - How To Reach

The city is located in the city of Jodhpur in the north-western state of Rajasthan in India. Jodhpur is a city which is well known for its Rajput heritage and rich history. Today’s Jodhpur is a modern metropolitan city which has all the modern amenities and also takes pride in being one of the major tourist attractions in India. The city is well connected with almost all the other parts of the country. Jodhpur Railway station is connected to all major railway stations in India through a large number of trains. The temple is located in Lal Sagar area in Jodhpur, which is about 8 kilometres away from the railway station.