Ambalika wife of Vichitravirya in Mahabharata 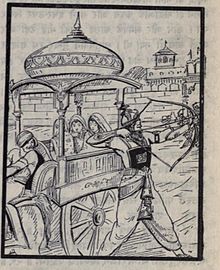 After King Vichitravirya's death, his mother Queen Satyavati sent for her first born, Rishi Veda Vyasa. She asked him to father children on the widowed queens of Vichitravirya according to the prevalent custom of Niyoga. Rishi Veda Vyasa had come from years of intense meditation and as a result, he looked tremendously unkempt. When he approached Ambika, she closed her eyes in fear. As a result the blind King Dhritrashtra was born. When he approached Ambalika, she turned pale in fear. Her son Pandu, the result of the niyoga, was born with a pale appearance.After the death of Pandu, Ambalika accompanied her mother-in-law Satyavati and sister Ambika to the forest and spent the rest of her days in spiritual retreat.