Posted by Abhilash MS
Kalpavriksha or kalpadruma is a wish-fulfilling divine tree as mentioned in Hinduism, Jainism and Buddhism texts. Allso known as kalpataru and kalpapadapa, this divine tree appeared during the "churning of the divine ocean" along with the Kamadhenu and other auspicious divine gods. Kalpavriksha  is kept by Indra in his swarka loka. This tree gives whatever we ask for, and it is a very holy one.

In Hinduism, we will mention some great saints similar to Kalpavriksha and Kamadhenu, since they fulfil the wishes of their devotees. The great Madhwa saint “Sree Raghavendra Swamy” is described as the holy tree Kalpavriksha and the Divine Cow Kamadhenu, in the famous stotra written by his ardent disciple “Sree Appanacharya”.

Kalpavriksha is mentioned in Hindu puranas and other ancient texts. In the previous dwapara yuga, Lord Krishna fought with Lord Indra to bring the divine tree to his dwaraka from heaven towards fulfilling the wishes of his wife “Mata Sathyabama”. And after the end of his avatar, the holy tree flew from dwaraka and reached swarka loka. This tree is guarded by the divine attendants of Lord Indra in the Swarka Loka. 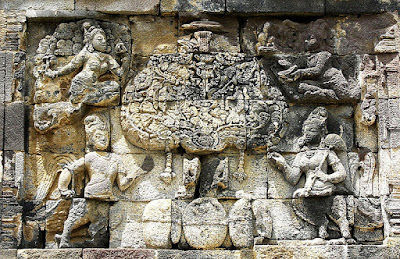 It is also believed that those who keep the tree with them will not be affected from any sins, diseases and death. They will shine brightly like a sun and get all the desires fulfilled through the divine tree. But for us it is not possible, since it is kept under the custody of Devendra, the king of demi gods in the heaven. Instead of that, we can pray to the divine tree from our place, and can get all the prosperity in our life. The great poet Kalidasa also praises the tree in his famous poetry Meghaduta. The parijata tree is compared to that of the divine tree “Kalpavriksha”, since it contains lot of medicinal properties and the flower of the tree is used for adorning the god’s deities.

The tree can be compared similar to Mata Lakshmi, since both of them emerged from the divine ocean. Though the tree is not specifically worshipped by the people, it is believed that through the grace of Kakpavriksha, the trees in the earth are giving more benefits to the mankind, like coconut tree and palm tree. And it is also believed that all the trees in the earth contains the features of Kalpavriksha, since each and every tree, gives some sort of benefit to us. They are giving shelter during the winter and summer season. Various birds are building their own nests in the trees only, and they are living through the grace of the divine tree “Kalpavriksha”. The holy tree Kalpavriksha is considered as the king among the trees. We can chant the mantra “Om Sree Kalpavrikshaya Namaha” regularly while doing puja in our home, and also we can recite the mantra in the temples in order to gain more fortunes in our life.

Let us worship the great divine tree and be blessed.