Virupaksha Temple at Hampi was built by Lokamahadevi, the Queen of Vikaramaditya II in about A.D.740 to commemorate her husband’s victory over the Pallavas of Kanchipuram. Resembling the Kailasanatha Temple at Kanchipuram, Tamil Nadu, the temple represents the Dravidian architecture. The temple is a huge complex with a Sanctum, three ante chambers, a pillared hall and a Mukha Mandapa (entrance porch) also called Ranga Mantapa or an open pillared hall and is enclosed by high Prakara walls.

An example of Vijayanagara Style of Architecture

Virupaksha Temple is a perfect example of the Vijayanagara Style of architecture. The main entrance of the Hampi temple is through the chariot street in front of the temple, popularly called the Hampi Bazaar which is considered as the largest of the bazaars of Vijayanagara. There are three towers in the temple. The nine-tiered eastern gateway is about 50 m high and comprises a two-tiered stone base. Though this entrance dates back to the first half of the fifteenth century, it was renovated in the sixteenth century by Krishnadevaraya (a Vijaynagar ruler). 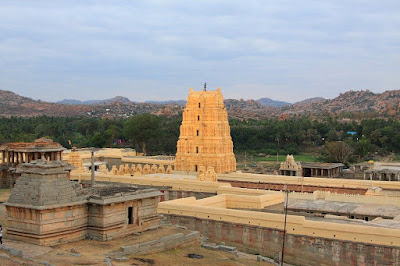 An interesting feature is that the inverted shadow of this huge tower falls on the western wall of the temple through a small hole behind the sanctum. The northern gopuram, known as the Kangiri Gopuram, is a five storey and decorated with beautiful pilasters. The inner eastern gopuram is a three storey structure. Antarala (a small antechamber), an ‘ardha-mandapa’ (ardha means half) and a ‘maha-mandapa’ or ranga mandapa are seen in front of the sanctum of presiding deity. The Ranga mandapam, built in Vijayanagar style by Krishnadevaraya in 1510 AD, is noted for its bas relief and murals. This five-aisled mandapa is decorated with various types of composite pillars.

There are sixteen pillars in the central rectangle, which have mythical lions with chains hanging from their mouths, 'makaras' (a mythical creature) below their feet, and riders, on their backs. Also portrayed here are some of Lord Shiva's manifestations, the ten avatars of Lord Vishnu (Dashavatara) and scenes from Great Sanskrit Indian epic Mahabharata depicting Arjuna's shooting the fish device to win Draupadi's hand. The ardha mandapa is seen to the west of the 'ranga mandapa' and its entrance is flanked by a pair of huge four-armed 'dvarapalas' (guardians of doors). A Vijayanagara structure, the ardha mandapa is decorated with bas-reliefs in its exterior walls and the central ceiling with a multi-petal lotus design.