Doddabasappa Temple in Dambal is a 12th-century western Chalukyan architectural innovation in Karnataka, India. The temple contains a Shiva linga. Here Nandikeswara is facing the shrine through Eastern doorway

Dodda Basappa Temple is a unique 24-pointed, uninterrupted stellate (star-shaped), seven-tiered dravida plan.  . The temple consists of a sanctum, a vestibule and a main mantapa. In the main hall, devotees can see three images, one of the five-headed Lord Brahma and the goose, and two images are of Lord Surya. 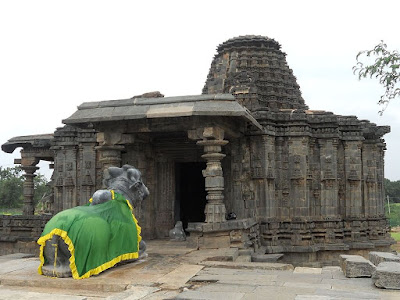 Dambal is located around 20 km south-east of Gadag city. The temple is around 24 km southwest of Ittagi in Koppal district.